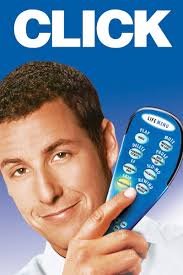 The movie click was a hilarious comedy. The movie took place as a man named Michael Newman. Michael has a hard time managing the time between his family and his job even though he knows which one is more important. Michael wishes to spend more time with his family but he has an impending job promotion coming up from his job which is the real reason that he works so hard. He keeps canceling and keeps canceling only to notice that his boss didn’t mean he was getting the promotion but actually just getting the got next position on it and it would come a long time after that. In between this train of events he gets in an argument with his wife and they stop talking and at the same time the remote stops working. He visits bed bath and beyond looking for a universal remote and goes in the back where a man gives him the remote that not only controls the TV but his life as well in this.

This movie was good and overall I didn’t find much things that were even bad about it. The worst thing I could say about it was the fact it got really gay at times but it was a small amount and it still was funny. All in all good movie. 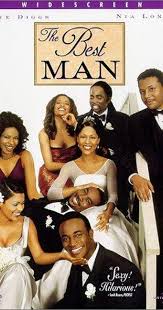 The best man was a great movie. The best man starred Taye Diggs as a young author named Harper Stewart. He recently made a book that would put him on the map as a professional author and would bring fame to his name. The book was about the life of his best friend who was now getting married but his best friend didn’t know about that. The big twist of the story was that Harper actually had sex with Lance’s wife before they were going out with each other in this thrilling romantic comedy. I’m not a romantic drama type of person because I’d prefer comedies and action genres but this movie was cool. It had an amazing plot to it and it actually taught a lesson that you can’t trust nobody even if it’s your best friend.